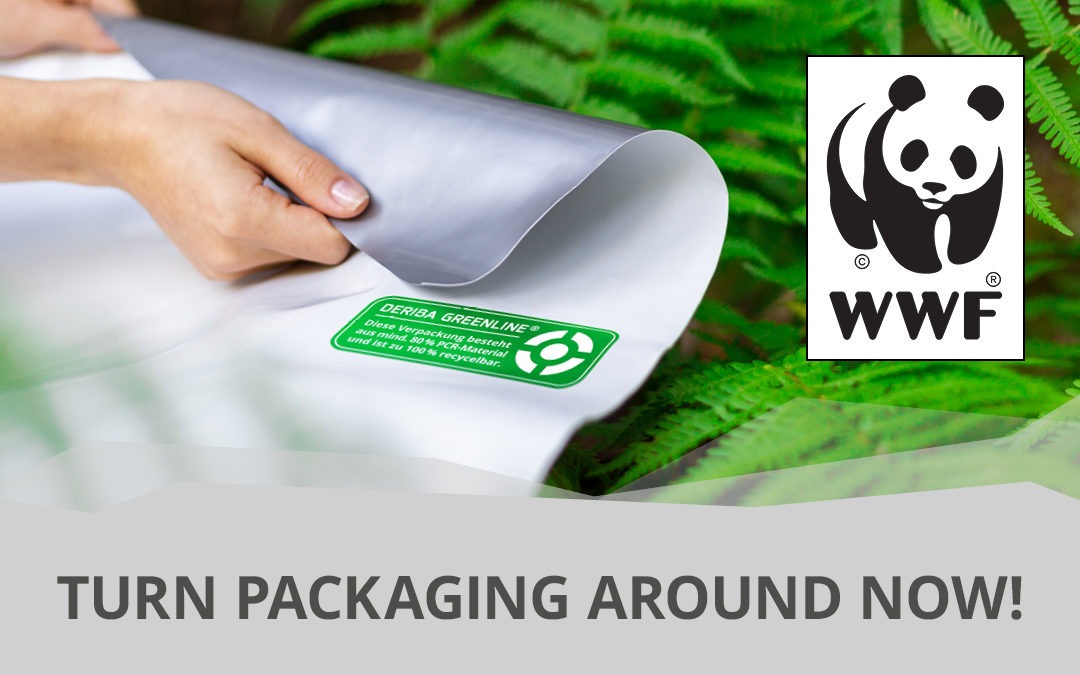 In mid-August, WWF Germany published a study entitled “Verpackungswende jetzt! So gelingt der Wandel zu einer Kreislaufwirtschaft für Kunststoffe in Deutschland“ (Turn packaging around now! How Germany can transition to a circular economy for plastics.) Joining its sisters energy and mobility, packaging is now ripe for fundamental change. The packaging revolution will entail complete system change and require Germany to take an entirely different approach to plastics. But for the DERIBA Group, the study is actually encouraging – because it confirms once again that we and our newly developed DERIBA GREENLINE® film (made of 80 % recyclate) have the right innovative mindset and are moving in the right direction. This comes hot on the heels of the recent confirmation that DERIBA GREENLINE® film has won the German Packaging Award in the “Sustainability” category. We were delighted to receive this news at the beginning of August, and are now looking forward to the award ceremony, which will be held during the FACHPACK trade fair (28 to 30 September 2021.

DERIBA CEO Frank Rieker couldn’t be more pleased. “We’ve read the new study, and consider it to be yet another stamp of approval for our work – the second in the space of just a few weeks,” he says, the latter being a reference to the award conferred on DERIBA GREENLINE® film. The film, incidentally, is also used in EDEKA’s reusable insulating carrier bags, which likewise won a German Packaging Award for sustainability.

“Out of sight, out of mind”

is not an acceptable answer to packaging waste!

In its study, the WWF criticises the fact that the demand for plastic is still rising, and that the materials involved are becoming increasingly complex. As a result, they’re harder to recycle. “In Germany, more than half of all packaging waste is incinerated. Most of the rest is exported – ‘out of sight, out of mind’ – or turned into poor quality recyclate. As a result, under 10 % of the material used to make packaging is recyclate. The rest consists of new plastic made from crude oil,” write authors Martin Bethke, Executive Officer for Markets & Business at WWF Germany, and Martin Stuchtey, founder and Managing Partner of SYSTEMIQ, a consultancy firm and think tank that is dedicated to achieving the UN’s SDGs and the Paris Climate Accords.

The authors of the study conclude that despite Germany’s high rate of collection and recycling, its handling of plastics is still largely a one-way street from production to disposal. However, there is enough room to build a lane for traffic in the other direction. Germany has the potential to expand the circular economy for plastic packaging, and there are various effective places to begin. For example, we can design innovative recycling models, find ways to avoid and minimise unnecessary packaging, and focus on recycling-friendly packaging design.

Which is exactly what we did with our DERIBA GREENLINE® film. “We based it on the ‘designed for recycling’ principle,” summarises DERIBA CEO Thomas Rose. For this product, the DERIBA Group replaced the composite PE/PA film by an LDPE monomaterials solution. As a result, the percentage of recyclate can be increased to more than 80 % – not least because polyethylene waste from other companies can be included. To round it off, the DERIBA Group has created a dedicated recycling loop for the product and offers customers a recycling kit for collecting their waste polyethylene packaging and returning it to the DERIBA Group. In this way, customers can play an important part in the decentralised recycling loop. “One of the companies in the DERIBA Group is our partner BeRec GmbH,” explains Frank Rieker. “They’re masters in the art of recycling and thanks to them, we’re able to bring our solution full circle. However, if GREENLINE® customers choose to dispose of their plastic film via Germany’s Green Dot waste recycling system, that’s fine too! BeRec isn’t the only company on the market that can handle this type of film and channel it back into the circular economy.”

The WWF Germany study details a possible scenario for system change, outlines various appropriate measures and lists the political tasks involved. But the authors also know that consumers need upstream and downstream solutions – all at the same time, and on a wide scale. “Without doubt, this will require a great deal of effort, enthusiasm and courage, not just from industrial partners, but also from the government.”

More information on DERIBA GREENLINE® film on our Website and inside the Pressebox.

This site uses Akismet to reduce spam. Learn how your comment data is processed.